At the end of the game, the raw scores are converted into an "end game score". This is most commonly referred as the plus-minus (+/-) score. The four end game scores are always set up to sum with zero. However, due to rounding errors, it is possible for the scores to equal to 1 or -1. In this case, the leader's or that of last place end game score is adjusted to ensure a zero sum.

The uma 「ウマ」 is the set point spread applied to the players at the end of the game. The typical point spread uses the format of 「+A / +B / -B / -A」, where A > B. Of course, the point spread does not necessarily have to follow that pattern, by which the spread does not need to be symmetric. In general, the point spread can be set to any value as long as the four numbers add up to zero. Point modifications may be used either to ease the conditions or increase the difficulty, particularly for tournament settings. 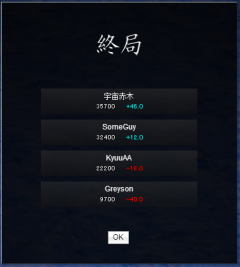 The end game score is calculated as follows:

Due to rounding, the final values may not add up to zero. Therefore, it may become necessary to alter the winner's score. Usually, the difference is only +/- 1.

In general, a fast way to determine the uma scores requires the difference between two sets of numbers. First, one must find the raw score rounded to the nearest 1000 and divided by 1000 (A). Second, one must either find or know the end score difference. If necessary, that requires using the original process to determine uma (B). Now, regardless of the raw scores, the difference between the end scores and the rounded raw scores (divided by 1000) remains constant.

As a shortcut, the adjustment can use the scores in the first column. Then the scores can be divided by 1000 and rounded. Finally, the values in the last column can be used to adjust for the final scores. Once again, this only works with the regular 「+20 / +10 / -10 / -20」 uma.

Just to show, the values in the image to the right are used:

As a note, the values on the right hand column did not change as the corresponding raw scores differed. So, to quickly determine the end score, it is simply the rounding of the player's score divided by 1000. Then the values in the last column is applied according to placement to produce the end score.

With different oka and uma 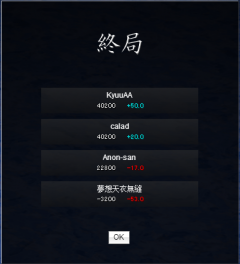 In the event of tied scores at the end of a game, then the tie-breaker based on the initial wind seating (or the first hand) may applied. The player closest to the dealer position takes the higher position. Afterwards, the final score procedure takes into effect. Even with tied scores, the player in the lower position will receive a lower uma score. Alternately, any oka and uma may be split evenly between the tied players, resulting in a shared placing. The specific ruleset in use determines how this is handled.

Oka and uma in Japanese Wikipedia