Of course, the proper equipment is needed in order to play Japanese mahjong. Naturally, mahjong tiles are used. It is possible to play the game using printed cards; yet, it is actually cumbersome to do so. In practice, tiles have been the most effective way to play the game in person.

The game is also available online, video games, and software.

Japanese mahjong sets usually come with 144 tiles in a case. For every tile, there is four of each type. Usually, every tile is dual colored, with every tile having the same colored back side; and these colors vary from one set to another. Some sets come with tiles whose front and back side are of the same color. Even then, a specialized set called a "Washizu set" features 3 out of 4 tiles using transparent acrylic material.

For Japanese mahjong, 136 out of 144 tiles are used. The extra tiles are four red five dora tiles: one for manzu and souzu, and two for pinzu. To use these tiles, regular five tiles are switched with the red dora. The remaining four tiles are four flower tiles, which are not used at all. Typically, Japanese tiles are individually about the size 16 mm x 19 mm x 26 mm (WLH). Like most mahjong tile sets, these tiles are capable of standing on their own.

The tiles may be subgrouped in a couple different ways. The first distinction is the separation by suits and tile types. Three groups of tiles form the numbered suits, while another group form the honor tiles, which can be further subdivided as dragons and winds. Within the numbered suits, the tiles numbered 2 through 8 are composed of the simples, while the 1's and 9's are separated as the terminals.

All tiles listed here follow the order used for dora. 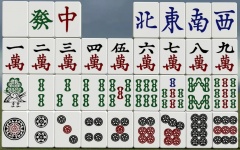 Manzu 「萬子」, or man/wan 「萬」 for short, composes the character tiles. The Chinese characters or Japanese kanji are used to indicate the numbers 1-9. While some sets have the alphanumeric representations of the numbers superscript on the upper right corners, it is actually best to remember the kanji for 1-9. Standard Japanese sets lack these alphanumeric superscripts. The character for man means "ten thousand". [1]

Pinzu 「筒子」, or pin 「筒」 for short, composes the coin or circle tiles. The symbols represent the use of coins.

Souzu 「索子」, or sou 「索」, composes the bamboo or stick tiles. Ordered 1-9, it is special to note the 1-sou tile which is marked with a large bird instead of 1-stick to discourage cheating by tile alteration.

Sangenpai 「三元牌」 are the dragon tiles. They are known as the dragons: white, green, and red. Just noting their color is sufficient enough here.

Mahjong mats are materials used to provide mahjong tiles a softer surface to slide all over. Naturally, the intent is to prevent or minimize the effect of friction onto the mahjong tiles. After prolonged play, the tiles may eventually wear themselves out and no longer be deemed usable.

Mats come in various sizes, but they're all square shaped. Junk mats provide a plastic perimeter with slots for point sticks.

Tenbou 「点棒」 are the point sticks used to keep track of scores. In a sense, these sticks may be viewed as the game's "currency". When points are exchanged between players, they may either give exact values or give values while requiring some change. Some gambling games may actually tie these point sticks to money. 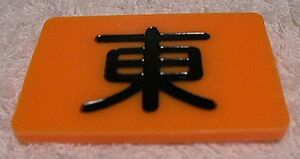 Automatic mahjong tables are used to expedite the process of tile shuffling and wall building. With the push of a button, players can save time as the wall building process is performed by machine.

Mahjong playing cards is an alternative material for the game. Mahjong tile faces are printed as playing cards. They are considerably cheaper than mahjong tiles, but the game is not usually played with cards.