Tenhou 「天鳳」 [1] is the one of the most popular online mahjong service in Japan. The site offers the game through either as a free web based platform and/or as a downloadable program via subscription.

Tenhou.net is a Japanese site. So, anyone, who is not familiar with navigating Japanese sites, may have some difficulty, unless they use one of the translation add-ons (for English and French) now freely available for Chrome and Firefox, which translate the interfaces for game play, registration, preferences and statistics.

The game lobby gives players access to game rooms, according to a number of rule sets to play with. Here, players have access to the different game rooms and player statistics. 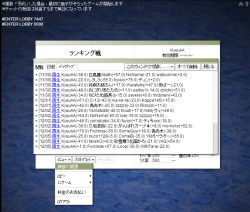 Every replay is accessible via a "replay game link". It is accessible via the drop down menu labled: 「メニュー」 (menu). The first item is labled 「牌譜の管理」. A sub-window, as shown on the right, pops up. The replay links are available here. While they're stored under three tabs, the latter two display the exact game links.

Only a certain number of links are available at the time. Usually, the most recent 30 games played are accessible, as they are stored within a queue. It is possible to save and retain older game links by copy-pasting them elsewhere. This Wiki itself is full of old replay links. Users of the Windows client do not need to worry about losing game links.

Players may use the interface to spectate "live games". However, they're not exactly live games, as they are actually delayed by 3-5 minutes. This is to eliminate any sort of cheating via simultaneous replay viewing, while in game.

In the main 0000 lobby, players may spectate games from either the Houou lobby. As such, any player may be able to watch and see the game play of the highest ranked players, currently in-game.

Tenhou.net is playable via various interfaces. All of them provide access to the main server, complete with access to the game's player base and statistics.

A mobile app is available for Android in Google Play and iOS via the App Store. The app is merely a browser frame that actually uses the /3/ web interface.

The Tenhou client is a downloadable application provided by Tenhou.net. Players easily find it on the game site's front page, via a large "download" button. However, it cannot be used without paying a subscription fee. The client application uses the same menus as the browser version, but it also has added features not available on the browser version.

Accessible at https://tenhou.net/3/. This HTML5-based interface was developed in response to the impending obsolescence of Adobe Flash. It is free for all users and all rooms.

Accessible at https://tenhou.net/4/. This is an improvement over the original /3/ HTML5 interface, providing HD textures, a 3D-like tile display, and official (albeit partial) localization into many languages. Similar to the Windows Client, it can only be used to play in the Ippan 「一般」room, unless one pays the premium subscription fee.

This interface no longer exists, but was the primary way to access Tenhou for many years before Flash became obsolete. 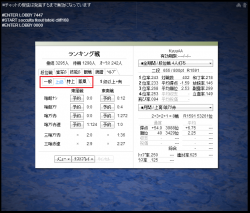 Main 0000 lobby, with the tabs for the four rooms indicated by a red box.

For Tenhou ranking, the game lobby is divided into four sub-rooms, with specific qualification standards.

General lobby area. Any player ranked below 4-dan and R1800 play here. This includes all new players and unranked players. The mix creates a somewhat chaotic game environment, where skilled and unskilled players alike play each other.

Lower "dan" lobby. Players attaining 1-kyuu, or those below 1-kyuu who have paid for a premium subscription.

Upper "dan" lobby. Any player ranked above 4-dan and R1800. The lobby consists mostly of 5-dan and 6-dan players all pushing to get into the highest lobby.

Reserved for only the highest ranked players in Tenhou.net of rank 7-dan and R2000.

Tenhou.net offers users the ability to play in custom rooms. Here, players may play unranked casual games, without any worry about their Tenhou.net ranking.

The site specifies a number of specific rules. While many general rules and procedures still apply, a number of rules for the game overall may be deemed as "optional"; and they may not apply elsewhere.

The most important rules to note:

Third party tools have been developed to give anyone access to player game histories. 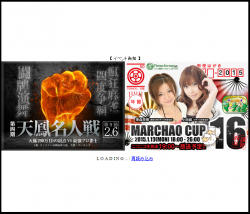 One of the site's features involve tournament lobbies. Here, users can manipulate different game rule settings to suit customized tournament rule settings. This ability allows users to host their own tournaments, without restriction from the main site. Naturally, game data from the tournament lobbies are separated from the general L0000 lobby as well as any custom rooms. Throughout the course of the year, various tournaments are advertized via the game's waiting screen.