Dora 「ドラ」 is a feature to the game, where possession of specific tiles instantly grants the hand 1 han per tile. However, hands still require at least one yaku in order to score, regardless of the number of dora in the hand. So, the possession of dora is best considered as a bonus. 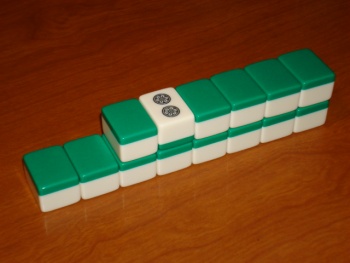 At the beginning of every hand, fourteen tiles are set aside as the dead wall tiles. The dora is marked by the tile after the flipped tile. Additional dora may be revealed through the use of uradora and/or kandora. Finally, additional tiles underneath any revealed dora may also mark more dora as an added benefit for hands won with riichi.

In terms of value, dora are counted by measure of han. However, dora functions as a "bonus value", where the hand simply cannot just possess dora in order to qualify as a winning hand. The hand still requires at least one yaku. In other words, dora is not a replacement for the yaku requirement.

For every hand, fourteen tiles are always set aside to form the dead wall, or wanpai 「王牌」. One of these tiles, the third from the initial wall break as shown in the picture, is always flipped over to indicate the dora.

This lists the complete dora order. As a repeat, the dora is the next tile within each of the following orders. Dora are not "cross indicated" among the different suits. Furthermore, the dora order loops.

The wind order follows the same order as the seat winds in the same counterclockwise direction as the normal turn order. Naturally, wind based dora are particularly advantageous to yakuhai. Yet, players seated off wind can still use this dora while implementing the appropriate yaku.

Other types of dora

Additional indicators of dora may be found in the game.

Specially marked haku as dora, next to a standard haku tile.
Multiple dora shown due to kan calls.

Akadora 「赤ドラ」 or akapai 「赤牌」 are specifically marked red dora tiles. If included in the game, these "red fives" automatically count as dora, regardless of the dora indicator. If the dora indicator is a four, the red five of the same suit counts as two dora. Most modern sets will include two red 5p, one red 5m, and one red 5s, and one red five of each suit is used in actual play.

Sets may include other tiles marked "red" as automatic dora. Five happens to be the common choice because it is the center number within the 1 through 9 range. Though rarely found, some older sets include a "red haku" tile (white dragon), with some marking not present on the usual haku tile, and some sets include red threes.

Uradora 「裏ドラ」, or underneath dora applies only to hands won using riichi. Thus, no open hand may ever have access to the uradora. In the event a riichi declared hand has won, the tiles underneath the dora indicator(s) are revealed. These newly revealed tiles serve as additional dora indicators. Potentially, such hands may potentially gain substantial value, just off of the uradora.

If there are multiple identical indicators, each indicated tile counts as multiple dora correspondingly.

After a call for kan, additional dora indicators, called kandora 「カンドラ」, are revealed. These are tiles next to the dora indicator counter clockwise on the dead wall. Depending on the rules and/or formality of the game, the timing for flipping the kandora during a kan procedure may vary. Casual games will simply flip the kan dora immediately after kan. More technical games will differentiate between the kan types, where the kan dora may be flipped after the player makes a discard.

Likewise, in the event of riichi, the uradora underneath the kandora are also revealed, as kanuradora 「カン裏ドラ」.

In some rules of three-player mahjong, North tiles may be picked. The procedure is the same of forming a added kan. The North tiles picked becomes doras.

A number of strategic considerations surround dora tiles. Because of the 1-han value of a single dora tile, players often desire them within their hands. This either involves possession of dora tiles or potential waits involving dora tiles. Of course, in many instances, neither is the case.

Rules variations allow the customization on the use of dora. Most commonly, the use of the initial dora is generally universal within Japanese mahjong. As for the other sources of dora, such as the kandora and uradora, some organizations would omit them. The most optional dora involve the akadora, where tile sets are sold with the red dora as extra tiles.