Ippatsu 「一発」 is a yaku completely dependent on riichi. It is awarded if the player receives a winning tile within an uninterrupted set of opponent tile draws after the riichi declaration. The earliest possible chance to win with ippatsu comes from the shimocha's discard (player to the right). The latest possible chance to win with ippatsu is with the player's next drawn tile after the riichi declaration. By definition, ippatsu requires a riichi declaration to be in effect, for an additional 1 han. Therefore, ippatsu cannot function as a stand-alone yaku.

Ippatsu is unique among the yaku, for it requires riichi to even be applicable. Because of this, it is impossible for a hand to with with ippatsu alone. At the very minimum, a hand could be riichi with ippatsu. Unlike riichi, ippatsu is not compatible with every other yaku. Only two cannot mix with ippatsu: rinshan kaihou and houtei raoyui. Regarding rinshan kaihou, the required call for kan to invoke rinshan already cancels out ippatsu. As for houtei, the following example for haitei shows the last possible chance to call riichi, which aims for haitei raoyue. 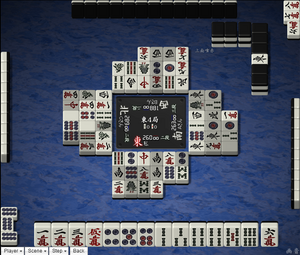