Naki 「鳴き」 are legal claims on immediately discarded tiles. The instant a discarded tile is declined for a claim, then it goes out of play and remains in the discard pile until the next hand. Discarded tiles gives players another source of tiles for hand completion, other than the regular wall. Upon claiming a discard, the player's hand is then considered to be open. As a consequence, the player loses the option to call riichi, and the hand is not eligible for menzen tsumo or other closed only yaku. Yet, some yaku allow the use of open hands, but they decrease in value by 1-han, when opened.

Tiles used for open calls are placed to the side. When revealed, they are still part of a player's hand. However, once placed to the side, tiles used for open calls can no longer be changed. As a consequence, the number of tiles for discard selection in a player's hand decreases with each tile call. From thirteen tiles, the count decreases to ten after one call; to seven after two calls; to four after three calls; and finally, to one after four calls. With this, a player's ability to defend is reduced with every tile call.

Yet, players may benefit from open tile calling from increasing the speed of hand development, convenience, or the irrelevance of losing hand value by opening. Players must also consider the number of tiles available. Overall, tile calling is a discretionary move. Especially with hands valued of mangan or greater, opening the hand may be a better option than keeping it closed.

Finally, the last discard cannot be claimed for any open calls, even if needed to attain tenpai. The call on the last discard is limited for winning hands, by which houtei raoyui is awarded.

As a general rule, tile calls apply to the tile immediately discarded. Naturally, players are not required to claim discarded tile; but they may do so under the condition of possessing 2 out of 3 tiles for a meld in the hand. Every discarded tile not claimed by discard remain in the discard piles, until the end of the hand.

In addition, kuikae is an additional rule to tile calls. Players may have tile groups within the hand; and a discarded tile may allow a tile claim. If a player wishes to create a meld (an open group) using tiles in hand that form a complete group with the discarded tile, then a player is not allowed to discard such a tile that would have completed the tile group that same turn. Concerned tiles can be thrown at the next or subsequent turns, or kept in hand for future use.

For each immediate discard, players have the option to make claims on discarded tiles based on the following conditions:

Chii 「チー」 is applied for opening sequential melds, to form minjun. To claim and complete sequences, the player to the right of the discarder may claim the tile and call chii. This means, any player calling chii may only claim tiles from the player to the left. Therefore, the tile turned sideways is always indicated on the left. Furthermore, this tile call may have a restriction named kuikae, where chii is called using an existing sequential tile group. In this case, the tile left over from the original, but now broken, tile group cannot be discarded. The player is forced to discard another tile.

Toitsu, or pairs, may be upgraded to minkou, or open triplets. Unlike "chii", the call for pon 「ポン」 may be called from any player on the board. As long as a player possess two identical tiles and a third is discarded, the player may call for that discarded tile regardless. Because any player may call, sometimes a player's turn may be skipped.

Kan 「カン」 may work like pon, except this call has some added procedures and additional situations. Likewise, the tile arrangements works similarly to pon. However, there is the addition of the other two kan types: ankan and shouminkan. For ankan, the hand remains closed, despite the use of a tile call. Instead, such a call is used to invoke the rules specific to kan; and certainly, kan does have some specific rules applied. Mostly, these relate to the dead wall and the revealing of additional dora. 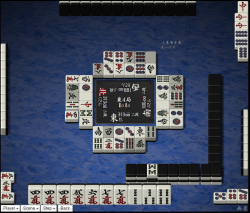 Instance where Ron, Kan, Pon, or Chii may be called.

Agari 「アガリ」 is the generic call for a winning tile.

Ron 「ロン」 is a specific tile call on a discard, when the discard actually completes the hand. Also, the hand must have a valid yaku. Under furiten, a player may not call ron, otherwise, it is a violation of rules and subject to chombo penalty.

It is impossible for kan and pon to be called simultaneously. However, either can simultaneously occur with chii. Due to precedence, the player, who calls kan or pon, gains the right to a discarded tile over a chii call. Overall, the call for ron or agari supercedes all tile discard calls.

Kuisagari 「喰い下がり」 is a property of some yaku to lose value when called open. By calling on a discard and opening the hand, a player sacrifices the value of 1-han per yaku for the privilege. Sometimes, the devalue may be viewed as disadvantageous; but the sacrifice for losing han value may be gained in the form of faster hand development. If certain tiles may be previously discarded, a player may need to make the open call, or else risk not be able to finish the hand at all. With the use of dora, the value loss from an open call is regained or deemed worthwhile.

Similarly, some yaku can be scored only with a closed hand. For some yaku, such as mentsumo or chiitoitsu, this is necessarily the case based on their structure or nature. For other yaku, such as iipeikou, the requirement of a closed hand is entirely artificial. These yaku are not technically instances of kuisagari, because the yaku cannot be used to fulfill the yaku requirement of an open hand: they are not considered to be yaku worth 0 han. In doing so, yaku of the property loses value completely and may invoke possible unwinnable hands by lacking yaku. Additionally, for ryanpeikou in particular, if it were subject to kuisagari, it would score 2 han when open, but instead it is not scored at all in an open hand.

Finally, some yaku are not affected by kuisagari. Even when open, they retain their original han value. These are yakuhai, toitoi, sanankou, sanshoku doukou, shousangen, sankantsu, as well as any yakuman that can be scored with an open hand.

The following yaku are affected by kuisagari:

A side effect to kuisagari involves atozuke. Tile calls may put a hand into position, where one of its waiting tiles do not produce valid yaku. With this in mind, tile calls must be made with careful discretion.

These tile calls do not apply to discards. Just like the discard calls, these calls are announcements.

Apart from claiming a discard to form a quad, a quad may also be formed by adding the fourth tile from the hand to the open triplet, or by taking out four identical tiles form the hand.

In some rules of three-player mahjong, North tiles may be picked and functions as a dora.

Riichi 「リーチ」 is a player's declaration for a ready hand. If desired, a player may announce riichi prior to discarding and invoke the rules involving riichi as a yaku.

Tsumo 「ツモ」 is the declaration for winning by self-draw. This may apply to any hand, open or closed. With a closed hand, it also counts as for the yaku, mentsumo. Even when furiten, it is acceptable to win the hand.

With regards to mahjong hands, the common question looks to determine the best practices of opening or closing a hand. For starters, players should know the yaku and their han values. Essentially, this begs the question: "Is it worth opening the hand, or is it better to remain closed?" Naturally, there are advantages and disadvantages to either approach. For both cases, the speed at which a hand attains tenpai rests on this decision. If a hand does not improve its shanten count, then it may not be worth calling, unless a specific goal is in mind.

For various yakuman hands, it is certainly advantageous to make calls on specific tiles. The sheer difficulty of yakuman hands overall make it necessary to make use of tile calls to even come near completion, much less score one.