Wanpai 「王牌」 are the tiles used to form the dead wall. Every mahjong hand session has 14 tiles, or 7 double-stacked tiles, set aside from the regular tile draw and discard processes. These tiles are considered to be out of play, hence the nomenclature "dead wall". Most of these tiles are used to indicate dora. The rest are used for kan draws and tile wall replacements. 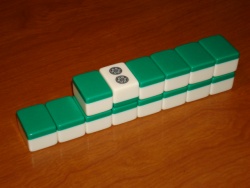 The fourteen tiles for the dead wall are arranged accordingly. Also, the last four tiles to the live wall are also included.

For every hand, the dead wall always starts with the very same arrangement. The kan draws are always the four tiles clockwise to the dora indicator. These are the rinshanpai 「嶺上牌」, which are only accessible via calls for kan. Not necessary but recommended, the first kan draw can be placed to the side of the second kan draw, like in the image to the right. This is to prevent accidental revealing of that first tile, in case it gets knocked off.

The dead wall is always responsible for indicating the dora. Ten of the fourteen original dead wall tiles are used to indicate dora. The first one is always revealed at the start of the hand. This tile is assigned as the dorahyouji 「ドラ表示」, or "dora indicator". It is always the third tile on the top row from the initial wall break. Tiles marked as dora are indicated as the next tile in the sequence, as noted in the "dora order". Additional dora may be revealed by calls for kan; and any tile underneath the revealed dora may be used in the event of winning riichi hands. Rarely, all ten dora tiles are revealed for a single hand; but it is possible.

The tile immediately before the dead wall is called the haiteihai 「海底牌」. When a kan is made, the current haiteihai will be moved into the dead wall; and the tile before it becomes the new haiteihai. Barring those kan calls, the last four tiles can individually be marked as the haiteihai, as one after the other are transferred to the dead wall. Only one tile at a time can be designated as this last tile.

Players may physically transfer tiles to the dead wall. However, the action is discouraged because it is unnecessary. The position of the last tile can actually be tracked as the hand nears the end. As a general tip, the last tile is trackable by counting six tiles on the top of the dead wall. That's if the rinshan draw is properly placed down.

Calls for kan affect the dead wall in three ways:

For every kan call, a player gains access to the dead wall and draws one rinshanpai. If the rinshanpai produces a winning tile, then this draw invokes the yaku, rinshan kaihou. Under most cases, players make a discard afterwards. After that discard, one tile from the end of the regular wall is added to the dead wall to the back end. This is to retain the count of 14-tiles. Unlike the original dead wall tiles, the added tiles can serve no function, other than as replacement tiles. Finally, an additional dora indicator is revealed.