Riichi 「立直」 or 「リーチ」 is the most commonly used yaku in the game. Among the yaku, riichi occurs at least 40% of the time across different mahjong platforms and professional settings. This yaku may apply to any closed hand and may be declared upon achieving tenpai. As such, riichi is attainable via numerous hand configurations, as long as it is closed. Due to its common usage, various specific game scenarios must be considered when using riichi, or facing opponents who have called riichi.

Unlike other yaku, the call for riichi operates at a player's discretion and is certainly not mandatory. Players may simply opt not to call riichi and retain the secrecy of a hand's tenpai status, using a tactic known as damaten. The decision for using riichi rests on some factors, primarily on need or desire. Current point standings often factor towards a riichi call, especially when falling behind in points. On the other hand, point leaders may tend to be conservative to limit opportunities for other players to score hands directly.

When a player has a closed tenpai hand, the player may declare riichi. Doing so gains the hand 1 han. To declare riichi, a player announces riichi and discards a tile facing sideways in the discard pile. This is done to indicate when riichi was called. If that tile is claimed by another player for an open meld, then the next discard is turned sideways as a replacement.

Unless the first sideways discard is claimed for a win immediately, the riichi announcer now places a bet of 1,000 points on the table. This bet is collected by the next player to win a hand. Of course, a player must also have 1,000 points to begin with, assuming that a game ends with negative scores. Specific rulesets may handle differently what happens to the bet on a multiple win.

After a riichi declaration, the hand remains locked and unchangeable. In this state, the player is simply waiting for a winning tile to appear, either by draw or discard. However, a notable exception may involve calls for kan.

It is not allowed to declare riichi when less than four tiles remain in the wall. The player must be able to draw one more tile in an uninterrupted set of turns. For any hand, the absolute last chance to call riichi is when the player has a chance to score riichi, haitei, ippatsu, and mentsumo.

A player may actually declare riichi with a noten hand. This is a noten riichi 「ノテン立直」, which is highly not advisable. Of course, computer based play is usually programmed to prevent players from making such a riichi declaration. If and when the hand results in ryuukyoku, then it is required of the player to reveal the hand to show tenpai. The noten riichi would naturally show noten; and it is subject to chombo. Likewise, chombo is applied if a win is called, as the hand's winning status would be verified only to reveal an invalid hand. Players may escape this dubious position, when another player wins the hand or has committed a chombo penalty. An abortive draw may also prevent the chombo penalty, except suucha riichi.

Kan during riichi is a discretionary play. Players must take note of the hand composition to determine, whether the kan is allowable or not. If the call alters the hand's waiting pattern or alters the hand's composition, kan is not allowed. Improper calls are subject to chombo if detected.

During riichi, a player may be furiten. In this case, the riichi is considered to be a furiten riichi. Likewise, after calling riichi, a player may decline the option to call on a winning tile, whether it be by self-draw or by discard. However, if a win is declined, then the riichi declared hand is subject to furiten for the remainder of the hand. Thus, all tiles discarded after the riichi declaration, as indicated by the discarded sideways tile, are considered to be guaranteed safe tiles. While it is advised to declare a win on the first opportunity, some plays may require a player not to do so under very specific circumstances. Of course, such play requires caution. 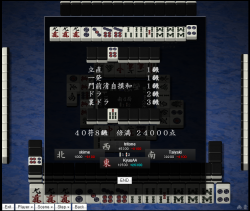 When a riichi declarer wins, he may flip the tiles underneath the dora and kan dora indicators. These flipped ura dora indicators may increase the value of his hand.

Tochuu ryuukyoku, or abortive draw, is in effect when suucha riichi occurs. In this case, three riichis have been called; and a fourth one is called in place. If the discarded tile is not claimed for a win, then the hand ends.

Open riichi 「オープン立直」 is an optional yaku, which is a modified version to riichi itself. The principle works exactly in the same way as the original riichi. However, there is an added bonus of 1-han attached, which is earned by revealing either the hand or the tile waits. This naturally eases everyone else's ability to defend against the riichi. In general, the intent involves winning by self-draw. As a further optional rule, yakuman may be awarded if any player actually plays into the open riichi. This is more or less a harsh penalty for playing into a revealed hand. Many official organizations and tournaments do not implement open riichi. It is more or less reserved for casual or gambling game settings.

For any given hand, more than one player may call riichi. Subsequent riichi calls after the first is called oikake riichi 「追いかけリーチ」. In English, this is often referred to as the "chase riichi". Oikake has one distinct advantage of an ippatsu ron chance against any previous riichi hands before taking a draw. After all, defense is no longer a factor to those hands, as they are committed to discarding non-winning tiles. The hands are essentially engaged in a "riichi duel" provided that they have different waiting tiles. Under many rulesets, the hand aborts in the event for all players to have declared riichi via suucha riichi.

Riichi may actually be called if all waiting tiles are rendered unavailable. A hand in this state is rendered as karaten. In this state, the hand is not winnable as the number of available winning tiles is zero. Such calls may be made by mistake, or intentionally to cause players to defend.

Ippatsu 「一発」 is a separate yaku but is very dependent on riichi. Riichi is required to score ippatsu, as the yaku is defined as a riichi winning before the declarer's next discard. Tile calls, including kan, are able to nullify ippatsu by denying it.

Double riichi 「ダブルリーチ」 is a special case for riichi. Here, the player declares riichi on the first turn before one's own discard. No tile call may have interrupted the turn order before the declaration, where applicable. For the dealer, double riichi can never be interrupted. As the name implies, this yaku is worth 2 han instead of 1 han, as a bonus for the initial timing. With the added han value, a call for double riichi has a huge advantage over the other players in conjunction with the immediate speed and value compared to conventional riichi calls.

Given the rules, riichi is compatible with all other yaku. Likewise, riichi and double riichi cannot be combined as they are essentially the same yaku. It just happens that double riichi is a specific instance of riichi. Per rule and definition, it is impossible to attain ippatsu without riichi.

Once again, the prospect for rinshan kaihou to work with riichi is dependent on the legality of the kan call during riichi. With computer interfaces, this rule may be enforced by disabling a player's ability to call the kan during this situation. However, with actual tiles, a player must be aware of this legality. Otherwise, chombo may be enforced instead.

Calling riichi is an optional play. Therefore, players often have to make various considerations, when it comes to using riichi. Often, this depends on the discarded tiles, how early or late in the hand, the hand value, and/or the player's hand composition. If possible, a player may opt not to use riichi at all and instead employ the strategy of damaten.