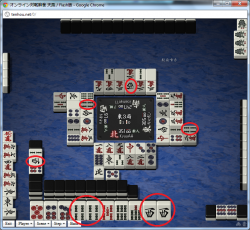 Example of a karaten riichi, with all waiting tiles circled in red.

Karaten situation, where the winning tiles to a hadaka tanki were called for pon earlier.

Karaten 「カラテン」, or empty tenpai, is a state where a tenpai hand does not have the ability to win. This is due to unavailability of all instances of winning tiles. The "visible tiles" may either be discarded, used as a dora indicator, or already exist in one's hand. Furthermore, they may be held in other player's hands or even reside within the dead wall. However, the latter case is beyond a player's visibility.

The term is often confused with the "fifth tile" case. Here, a hand waiting for a fourth tile that is simply hidden, discarded, or used by someone else remains a valid tenpai in all circumstances. A hand may contain a 1-2 penchan and a previously declared kan of 3-3-3-3 in the same suit. This renders the threes unavailable as winning tiles. Some platforms would consider this case as tenpai, while others may deem it as noten. As always, this depends on the rule variations.