Daburu riichi 「両立直」 or 「ダブルリーチ」, is simply double riichi. This is a special case for riichi. In this case, the player's start hand is already at tenpai from the dealt tiles, or the initial draw produces a tenpai hand. Effectively, this is the fastest possible tenpai hand. Naturally, a player has the option to declare riichi at this time. Rarely does a player decline such a call, but it does happen. No tile call may interrupt the turn order before the declaration, where applicable. For the dealer, the only possible interruption would be a call for a closed kan.

Double riichi is worth 2 han instead of 1 han for a normal riichi, as a bonus for the initial timing. With the added han value, a call for double riichi has a huge advantage over the other players in conjunction with the immediate speed of the hand. Of course, that advantage withers away with each unsuccessful draw, especially when the number of safe discards increases as the collective draws and discards progresses.

It is very much possible to call a double riichi and be in furiten from the beginning. This can only be done with a hand qualifying for either tenhou or chiihou. However, this is a dubious play, either intentionally or unintentionally passing up yakuman. For this reason, it is unwise to be hasty about the prospect of a double riichi. 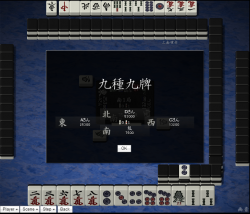 Double riichi's greatest advantage, aside from its speed, is the lack of information regarding safe tiles at the beginning of the hand. Initially, every tile is considered to be dangerous, as no to few discarded tiles show any indication of safe tiles. However, this advantage can be worn away as every non-winning tile becomes a safe tile upon discard. Per the furiten rule, every tile not claimed for a win after the riichi call is considered to be a safe tile - against the riichi caller. If a winning tile does not come soon enough, then other players may actually attain tenpai in their own right and may leave the initial riichi declarer to be vulnerable. If affordable, a player may employ sashikomi, in the hope of dealing into a cheaper hand.

For more unusual situations, the threat of a double riichi can be averted by ending the hand via abortive draw. Kyuushu kyuuhai can immediately end the hand before the declarer can claim tsumo. An even more unusual possibility can end with suufon renta. Eventual means can be provided by sanchahou, suu kaikan, or even a risky suucha riichi. 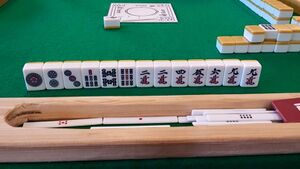