Renhou 「人和」 is an optional yaku. It is defined by a player declaring ron with a starting hand before drawing their first tile and before any called tile. This premise is similar to the chiihou, except the hand wins by discard (ron). In some instances, it may be considered as a yakuman, mangan, or not used at all. Only non-dealers may invoke renhou because it is impossible to declare ron before the dealer's first draw (no discarded tiles yet). 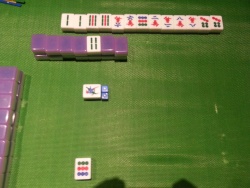 Because of number of variations and interpretations to renhou, it is viewed as optional.

By default, renhou can be defaulted as a mangan hand. In this case, if the hand could score more using normal counting of yaku and dora, it will be scored for the alternate value (since the highest-scoring hand must always be chosen). The hand must have at least one yaku for this, however; dora alone cannot allow the hand to be scored separately.

Likewise, it can be set as a yakuman.

A few rulesets set renhou as a baiman, though this is relatively rare.

Renhou may be considered as a yaku, to be cumulative with other yaku, with a variable han value. It is frequently set at 4 han, so that the hand is always worth mangan minimum if it has any other yaku.

Renhou may not be used at all.