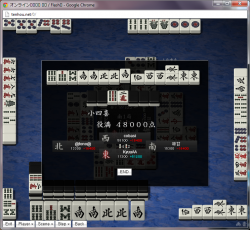 Yakuman 「役満」 are a class of yaku (hand patterns), whose default point value is set at the maximum limit for a single hand pattern. Only a subclass of yakuman, kazoe yakuman, actually counts the number of han. The rest of the patterns are simply applied the point limit. This is due to the level of difficulty attaining the hands, due to low probability and low frequency.

A yakuman's value stems from its difficulty to form; and this difficulty is tied to its rarity as well as various limitations. These limitations impose some scarcity pertaining to specific tiles; or a limitation may impose a very specific condition, particularly for the likes of tenhou and chihou. The other yaku impose their own specific limitations on tiles as well. However, their limitations offer a greater range of tiles to choose from. For example, both ryuuiisou and chinroutou are limited to just six tile types out of the available thirty-four.

Regardless of the difficulty, yakuman are not impossible. Therefore, players with the chance of attaining yakuman may actually benefit by continuing to develop a yakuman hand. Like any other game situation, various factors do play into this decision, such as the hand progression relative to the number of tile draws remaining and the current score.

Among the yakuman, three in particular are considered to be among the easiest to attain: suuankou, daisangen, and kokushi musou. Collectively, these three yakuman are known as yakuman gosanke 「役満御三家」, or "the three big families of yakuman".

The chance for yakuman are few and far in-between. Like with any yaku, the chances only increase with a proportional quantity of games played. That's one basic rule of probability, where likelihood only increases with the number of games played. Naturally, any other increased chances may be imposed by unusual strings of luck and circumstances. When a chance does occur, then the player must be able to determine which yakuman appears to be the most viable. Even then, the player must be able to recognize if the chance is even possible at all.

When scoring a yakuman, a player's chances of winning the game dramatically increase. The high value of the yakuman hand either eliminates a player into negative points, or it produces a seemingly insurmountable lead. However, it does not eliminate the possibility of dropping out of first place. This is especially true with yakuman scored early in the game, while every player retains points greater than zero. 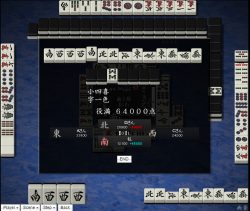 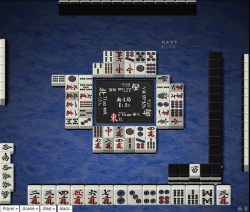 Yakuman can combine with regular yaku, only for the use of aotenjou. Otherwise, they are disregarded, where only the yakuman name is referred. The only way regular yaku factor towards yakuman involves the kazoe yakuman.

Some yakuman patterns may combine with each other. This is only because the tile patterns allow them to do so. The most common combination may involve tsuuiisou, which is able to combine with either daisangen or suushiihou (wind based yakuman). Both Tenhou and chiihou are able to combine with almost all the yakuman patterns. However, their frequency and opportunity to do so is exceptionally rare. The other yakuman combinations at least have the progression of the hand to develop, in order to even produce the opportune chance.

The last thing any player should do is play into a yakuman hand. Alas, such plays do happen, even to the best of players. Of course, this is where defense comes into play, especially when a yakuman is an apparent threat. Then again, some instances renders a player unaware of a yakuman threat, where the circumstances can be described by damaten or similar to it.

Lists all the yaku occurrences in Tenhou.net by percentages and by ranked lobby.

Lists any yakuman scored within the regular L0000 lobby, within the current month.