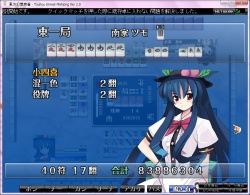 Aotenjou 「青天井」 is a rarely used scoring system, by which all caps and limits are removed. Per the scoring equation, han is factored exponentially in the equation:

Normally, the point equation has a cap applied at mangan, where the basic points is artificially maxed at 2000 points. Subsequent point values are then multiples of mangan for higher scoring hands.

With aotenjou, there is no limit. The basic points have the freedom to be valued as high as possible. The exponential nature of the scoring equation can produce astronomically large point values. Points are even much higher in conjunction with the multipliers applied for the dealer, non-dealer, and ron vs. tsumo wins. All yaku retain their original values. In additionally, yakuman patterns are defaulted at 13 han per yakuman count; and they are treated like normal yaku when determining the overall han and fu values. Furthermore, any han applied by dora counts as well to further increase the point values.

Hence, for this very reason, the scoring limits imposed by both mangan and yakuman are normally used. The numbers are simply too large for practical use under many circumstances.

Under aotenjou rules, yaku that are implied by the completion of another yaku are not counted as additional han for the purposes of scoring. For example, suuankou's 13 han is not combined with sanankou's 2 han because sanankou is a prerequisite for suuankou.

With aotenjou, every aspect of this hand is considered, not just the yakuman patterns. This hand also includes the regular yaku of toitoi and sanankou as well as two or three yakuhai when applicable. This hand stands at 31 han and 50 fu via tsumo:

Any dora to these examples definitely increases the hand even further.

The exponential basic points equation does have an upper limit, imposed by the maximum possible han and fu combination. This cap only exists due to the maximum capacity with the finite tile count per hand. So, it can only be broken if the number of tiles in the hand can be increased. Per the rule variations, the rules are applied to produce the maximum hand possible.

In a hypothetical ruleset with double yakuman, the maximum scoring hand would consist of the following, assuming the player is dealer, it's the East round, and with the yaku of riichi, ippatsu, tsumo, haitei.

This hand's fu value would be calculated as:

The han value of this hand would be calculated as:

The highest possible fu count is 170, as in the following example for the south player in the south round: