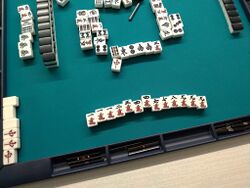 If this hand wins with either of the yasume tiles, the hand will score only chinitsu rather than the yakuman.

Chuuren is a yakuman hand. However, while tenpai, some tile waits may actually award the hand for a considerably less value of haneman, as a closed chinitsu. Some rules award a double yakuman instead when the hand goes out from the 9-sided wait.

The key to this yakuman is the possession of ankou of both 1's and 9's of one suit. Since this hand uses a single suit, it overlaps chinitsu during development. In fact, many tenpai formations may result in chinitsu, rather than the yakuman. This is due to the ability of chinitsu to form some complicated waits. If two of either group of tiles are not available, then any attempt at this yakuman is no longer possible. Of course, that is in addition to the collection of a string consisting of 2-8 tiles of the same suit. Likewise, if all four copies of any one of these numbered tiles are rendered unavailable, then the yakuman is no longer possible.