Suukantsu 「四槓子」 is a standard yakuman, where the hand has collected kan four times. As a result, this hand always has uses a hadaka tanki machi, because four tile calls are required. Unlike all the other patterns, this yakuman cannot afford to have particular tiles unavailable via discards, the dead wall, or used in other player's hands. By far, it is the longest possible hand in the game, requiring 18-tiles. Of all the hands possible, suukantsu is the rarest. It is even more rare than either tenhou or chiihou.

This yakuman requires four kan calls. As a result, the hand in tenpai always uses hadaka tanki. In order to call a single kan, a player must draw at least 3 out of 4 of a single tile type under any of these three scenarios:

For this yakuman, a player must repeat any of those kan calls four times. This yakuman is the most difficult yakuman to attain tenpai, let alone score. If any of those tiles are rendered unavailable for kan, it forces the hand to seek other possible tiles to call kan with; or the hand is made virtually impossible. 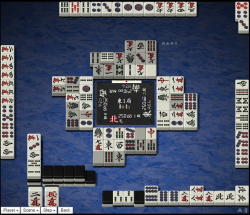 The difficulty of this yakuman stems from the numerous pitfalls during its hand development. Any one of these scenarios can prevent this yakuman from completion.

Despite the greater degree of difficulty (Of particular note, unless a dead wall draw is used to form a meld, all hands viable for suukantsu could have been used for a suuankou while the converse is not true) and exceptionally low frequency of occurrence, the value remains as that of the other single yakuman.