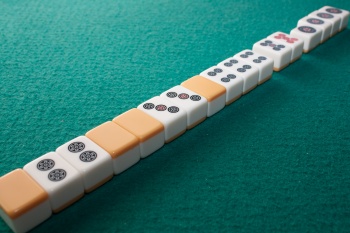 Kan 「カン」 is a special tile call in the game. This call forms a tile grouping of four identical tiles, called kantsu 「槓子」. Just like all tile calls, the call itself is optional; thus, an opportunity to call kan is not mandatory.

While appearing as a four-of-a-kind, the tiles used to form kantsu actually function as a three-of-a-kind plus one extra tile. With that in mind, tiles called for kan still interpreted as "triplets" particularly for triplet-based yaku, such as toitoi and sanankou. For every kan declaration, players are required to take an extra tile draw from the dead wall. This drawn tile is called the rinshanpai, or dead wall draw. After the kan call and player's discard, then another dora indicator is revealed.

The call for kan is a discretionary play, with its own set of rules and restrictions. Under all circumstances, a player may call kan or decline when given the opportunity. The strength of kan play stems from the exclusive access to the dead wall and the revealing of additional dora. At the same time, kan play is very risky, where other players may end up as the benefactors. Therefore, players may decline calling the kan to minimize risk. Choosing to do so or not, this play does require some assessment; and players are not encouraged to make such calls recklessly. On the other hand, players may rely on kans, when it is needed. 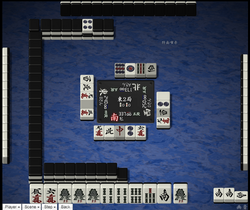 Like the other tile calls, kan is also a tile call. However, it comes with special properties and rules. These rules apply when a player possesses or gains possession of four of the same tile; and then the player makes the kan call.

The call for kan reveals additional dora, in the form of kandora. The timing of this reveal is variable, depending on the rule set and/or game platform. The simplest rule invokes an immediate reveal upon the declaration; and so, this rule would immediately place the kan reveal after step 1. Others distinguish the timing between open and closed kans. Here, closed kans would be granted an immediate reveal; however, open kans would produce another kandora indicator after the discard, upon conclusion of the kan process at step 8. Regarding the timing of the kandora, players will need to consult organizational, tournament, and/or local rules.

Kan can occur under three different occasions; and thus, there are three types of kan based on drawing order:

Daiminkan 「大明槓」 is also called an "open kan". A player possesses three of a tile type within the hand. Then the fourth is discarded. The player may claim the discarded tile and form a daiminkan. Upon doing so, the player has opened the hand, if the hand was initially closed.

Some rules invoke sekinin barai on a player discarding into the daiminkan.

Shouminkan 「小明槓」 is referred as an "added kan", where a player had previously called pon to form a minkou, or open triplet. Upon drawing the fourth tile, the player may add that tile to the minkou and upgrade it to a shominkan. If the fourth tile was discarded by another player, it cannot be claimed by kan. The kan dora indicator is flipped at the same time as for a daiminkan. Another term to describe this kan is kakan 「加槓」.

The player may declare this kan during any turn; and therefore, the player does not need to declare kan immediately at first opportunity. If the player has just claimed a discarded tile instead of drawing a tile from the wall or the dead wall, then the ability to declare kan is disabled on this turn. The player would have to wait for the next tile draw instead. It is also forbidden to declare a kan while the wall is empty, because the dead wall cannot be replenished.

This kan call is vulnerable to one specific yaku: chankan or robbing the kan. If another player is tenpai and the added tile completes his hand, that player may call ron immediately after the shominkan declaration. It ends the hand before the kan is completed; therefore no new kan dora indicator is flipped.

Also known as a "closed kan", a player may draw all four of a tile type. Unlike the other two kan types, ankan 「暗槓」 keeps the hand closed, unless the hand has been opened previously. Thus, even with an ankan call, the player may still have the option of declaring riichi even with such a kan call, calling kan during riichi barring restrictions, and/or winning the hand via mentsumo.

Per rule variation, the kandora indicator is flipped immediately with an ankan call, rather than waiting for the player's discard or the rinshan draw.

Like a shominkan, an ankan may be declared during the player's turn. As such, the player holds all four tiles. The same restrictions as for the shominkan apply. An ankan may not be subject to chankan, except against a kokushi tenpai, if the rules allow.

Tiles called for "kan" are set aside. In most cases, they are called for open tile groups. However, one arrangement in particular still indicates a closed hand ("menzen").

Daiminkan are indicated as open tile groups, with the four tiles next to each other and one tile turned to indicate the player it was called from. For daiminkan claims from toimen, or the player across, it does not matter which "middle" tile is turned sideways, as long as it is one of the middle tiles.

Shouminkan are indicated as open tile groups, by stacking the added tile above the rotated tile from the original minkou.

If in possession with the proper tiles, a player may call kan more than once consecutively. The extremely rare case of up to four consecutive kan calls within a single turn is possible.

In this example, kan may be called twice in a row after drawing 1-man. Both the 1-man and south may each be called for shominkan, before making a discard. Naturally, this must be done one at a time, following the proper procedure for kan.

As for kan dora, ankan (closed kan) is the only case, where a new indicator is shown immediately after the kan call. Otherwise, the number of kan indicators is one less than the number of kan consecutive calls. In the case of the above example, two added kans were called sequentially; but only one kan dora indicator was shown upon winning the hand.

Kan calls after riichi is possible and may be allowed or disallowed depending on the hand's composition. Under all of these cases, the call for a closed kan is used. The other two types of kan calls cannot occur, as riichi requires closed hand.

When a riichi declarer holds three identical tiles and draws the fourth after the riichi announcement, the player may form an ankan from these tiles instead of discarding the fourth. The hand composition and the possible winning tiles may not change: it is not allowed to declare kan if, for some possible winning tile, any of the three identical tiles may be interpreted as part of a sequence or part of the pair.

If a player does declare a kan illegally during riichi, and they call ron or the game goes to an exhaustive draw, then they will be penalized with a chombo penalty for breaking the rule. If a player is not required to reveal their hand, or if another player wins, they will normally not be penalized.

Of course, a player may outright decline the call for kan and discard the drawn tile. After all, the play invokes a risk pertaining to the kandora. During a riichi call, the player is defenseless against the benefactors of the new dora.

It is not allowed to kan the fours. The manzu tiles may either be interpreted as a 3-4 ryanmen wait and a 4-4 pair, or as a 4-man ankou with a 3-man tanki wait. A kan call would alter the wait just for a 3-man tanki. For a legal kan declaration, the three identical tiles would have to be an ankou in any interpretation. Had the player drawn a west wind, he would have been allowed to kan it.

In this example, none of the waits are affected by any of the kan possibilities. The waiting tiles are completely unrelated to any of the existing triplets in this hand. Therefore, it is acceptable to call kan during riichi here.

Here, the waits are 457p. A kan on 6p would remove the 7p wait, so it is obviously not permitted. A kan on the 3p would not change the waits, however, if the hand was won with 4p, the hand could be interpreted as:

In this case, the 3p does not form a triplet, but rather a pair and a part of a sequence. A kan on the 3p would remove this potential interpretation of the hand, and is therefore forbidden.

In this example, a kan declaration does not change the wait, but it does change the possible interpretations of the hand. The pinzu section can be interpreted either as three consecutive triplets or three identical sequences :

In this case, a kan call on any of the pinzus would leave only the three triplets interpretation possible. Thus, any of these kan is deemed illegal after riichi, even though it doesn't change the waits. 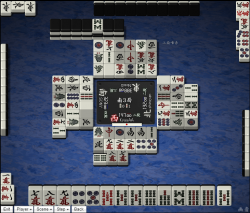 Instance where kan is denied due to lack of live wall tiles.

After taking a discarded tile, a player cannot call kan, even if a player has the tile(s) available in hand to do so. The next opportunity to call kan comes after the next tile draw. This does not apply when a daiminkan is called, as the kan causes a tile to be drawn immediately.

This is an "abortive draw", regarding kan calls. From the dead wall, only four tiles can be used for the extra draw, or rinshanpai. The remaining tiles from the dead wall are used as dora indicators, or they are tile replacements from the regular wall. Neither of these two tile type can be used in play. As a result, the limit of kan calls for a hand session is set to four. After the fourth kan call, the kyoku (hand session) ends after the discard, barring that discard cannot be called for a win.

However, an exception is made for players with suukantsu tenpai. After the fourth kan call, the game continues giving the player a chance to score the yakuman. Other than another player winning, this chance may be abruptly ended with a fifth call for a kan; and the hand ends immediately.[1] Otherwise, the game may continue to ryuukyoku.

In general, tiles called for kan are still applied as triplets. Any call for kan does not interfere with any yaku dependent on triplets, such as sanankou or yakuhai. Four yaku are centered around kan calls. One applies a win via the kan draw; and the other is applied to added kans. Then the last two are composed of kans.

Chankan is a yaku applied on a shominkan (added kan) declaration. A hand in tenpai for a kan call on a tile added to a called pon may declare ron on that tile.

Rinshan kaihou is a yaku gained by calling tsumo on the replacement tile after any type of kan declaration.

Both sankantsu and suukantsu require kan calls in order to count. The first requires three calls, while the latter calls for four. Both are rather difficult due to this requirement. Sankantsu is not a yakuman, but some yakuman are actually easier to attain. Suukantsu is by far the most difficult and most rare yakuman to attain. 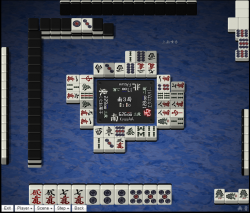 This hand was suddenly upgraded by 3-han with the call of the haku kan. [1].

The nature of kan dora makes the call for kan a risky maneuver. With this in mind, some quick assessment is needed before making such a call.