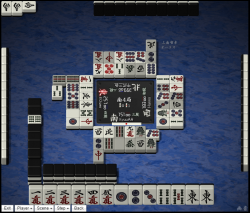 Discarded winning tile may not be enough for gyakuten.

Gyakuten 「逆転」 is an instance, where a player had passed up the placement of another player during the last hand. Players can either "luck" their way for a last minute win (or improvement in placement); or, they can know the points table. The latter can produce an advantage by having a better idea on the needed tile composition as well as other key decision making options, especially riichi.

The term normally applies to the last hand of the game. If a player manages to pass up a another player's placement position in this last hand, then the chance to lose the new position is eliminated because the game had ended. Either way, given the last hand, lower placed players must develop their hands in a way, such that gyakuten is possible. On the other hand, players with their desired standing must find a way to retain their position at the end of the game, either by winning the final hand or simply avoid losing points.

With essentially the last hand of the game, players have one chance left to make a difference in the game. With that, awareness of point difference is key, which links directly to values from the scoring table. Here, minimal hand values are considered at the very least in order for players to surpass others higher in placement.

Using the values from the scoring table, point differences can tell players, which hand values are necessary to accomplish surpassing leading players.