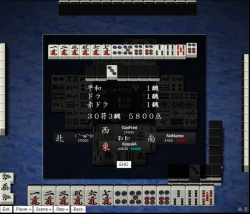 Game ends before any hand rotation.

For Japanese mahjong, the game may end according to different scenarios. Normally, the last hand of the game is in South 4 (for tonpuusen, it is East 4). This last hand is generally designated as oorasu. However, depending on the rules, the game may very well not end in South 4 (East 4); and it may extend into an extra round. Finally, the game could end well before oorasu, when a player's points drop into the negatives.

Both a start score and a goal score are set for games. The start score is self-explanatory, indicating the starting number of points for each player. The goal score is the minimum number of points required for the game winner to attain after the final regular hand of the game. Under most settings, players begin with 25,000 points and aim to be the highest score above 30,000 points. Of course, these point settings can change in accordance to club, parlor, or tournament hosts.

Enchousen 「延長戦」 is an extra wind round. The extra round functions like an "overtime sudden death period" This extra round continues, when no player scored above the goal score after the final regular hand. The instant a player scores above the target points with a winning hand, then the game ends immediately; and the same player wins the game. However, ryuukyoku cannot end the game. For a regular hanchan game, this extra round is indicated as the West round. For tonpuusen, the South round takes on this role.

Tobi 「トビ」 pertains to negative scores. In general, games end when a player falls below zero points. However, some game settings allow the continuation of the game despite the negative scores. This is particularly applicable to televised games, which do not desire the premature ending to a game.

Oorasu 「オーラス」 is designated for the last dealer of the game; the term is derived from all last. This is the South 4 hand; for East only, it is the East 4 hand. By this point, every player has had the chance to be the dealer twice (once for East only). Naturally, if the last dealer wins, renchan may occur for another hand. Though, the game may end if the last dealer happens to be the points leader; or if the other players force a wind rotation. This depends on agariyame.