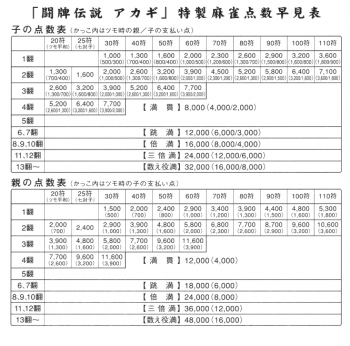 Despite the size of the scoring table, it is possible to memorize the table, in a manner similar to memorizing a multiplication table. However, any attempt to learn the scoring table is fruitless without knowing particular prerequisites, like basic game procedures and the yaku with their han values. As a recommendation, scoring is among the last of the more basic concepts of the game for any newer player to learn.

Aside from the point values, hand scores can be expressed in terms of han and fu. Players, who do not know point values, may depend on the combination of these two numbers and then rely on an available scoring table.

Counting han is simple memorization of the yaku and their han values. As a reminder, various yaku may stack and combine with other yaku. For each time a hand is scored, it becomes a matter of counting off the applied han.

To count fu, a player must understand how fu is generated. In essence, fu comes from the hand's composition and winning method. Yaku has no bearing on the fu count, aside from required tile compositions of specific yaku. The presence of triplets, kan calls, closed waits (kanchan), and/or pair waits should be enough to prompt a player to look at a hand more carefully to count fu.

The convenience of counting fu rests on rounding up. Even a fu count of 32 fu gets rounded up to 40 fu. So, when counting fu, it is helpful to note when the count crosses a multiple of 10.

The hand must be a closed pinfu hand. However, it gets paired with menzen tsumo; so it defaults as 2 han and 20 fu.

A notable possibility for this value exists for a hand, that may be considered as an "open pinfu". In other words, it is an open hand, that takes the shape of pinfu. Naturally, it is not classed as pinfu, but it still scores 2 fu for an open pinfu. As a result, for "ron" values, 20 fu is impossible; the lowest value possible value is at 1 han and 30 fu.

Thankfully, the points arrange themselves into particular patterns.

Overall, the majority of the points in the scoring table pertaining to ron can be learned with these patterned numbers:

The sum of tsumo values are equal or almost equal to these particular numbers.

For mangan 「満貫」 and beyond, a point cap is applied, such that counting fu may not be necessary. Fu will still be counted; but for scoring purposes, it is not necessary to count fu, due to the cap on the basic points calculation. Mangan begins with hands valued at 3 han and 70 fu, 4 han and 40 fu, or 5 han. For each, if the fu count is greater, they are retained at mangan.

So, this section of the scoring table easy to remember. For easier memorization, these higher values possess specific names, namely: haneman, baiman, sanbaiman, and yakuman. Likewise, they are worth factors more than mangan.

By far, these are the easiest numbers to remember because they are round, convenient numbers. The names for each makes it even easier. Plus, their amounts are highly desired.

Despite the full range of the entire scoring table, the more frequent score combinations are best to focus on, after the simpler mangan+ scores. The frequent occurrence of the common scores will end up becoming more routine with each scoring hand.

Among the hands valued at 1 han to 4 han, the most common scores involve 30 fu or 40 fu. So, among the han-fu combinations, this is the most logical section to start.

The 25 fu column involves the yaku, chiitoitsu. This yaku is unique enough, such that it has its own fu column dedicated to it. The uniqueness stems from its own hand pattern, as it does not follow the typical "4 tile groups and a pair" pattern like most hands. Unlike the general rule to counting fu, the fu for chiitoitsu is not rounded. Instead, it remains at 25 fu. This is set by definition.

Once again, a chiitoitsu valued at 5 han or greater follows the "mangan" scoring pattern.

Various point values are equivalent among the different han and fu combinations. By recognizing the equivalences, this eases the task of memorization, when one section or column of the scoring table is learned.

In general, if a fu count is divisible by 2 and a fu column of that result exists, then the points are equivalent to a han-fu combination of 1+ han. For example, 3 han and 60 fu is equivalent to 4 han and 30 fu. Both han and fu combinations score 7700 points for non-dealer ron, 11600 for dealer ron, 2000/3900 for non-dealer tsumo, and finally 3900 from all for dealer tsumo. Various other similar scoring equivalences exist throughout the scoring table. In a sense, as long as one learns the 25 fu, 30 fu, and 40 fu score columns, then most of the other fu columns fall on simple equivalency.

Hands with 20 fu only applies to pinfu with menzen tsumo. This yaku is defined as a hand that does not earn fu. Although, it still earns the 10 fu with closed ron. Otherwise, the hand does not produce fu by any other means.

Now, 25 fu can be doubled to 50 fu. So, knowing the "chiitoitsu" point values, one would already know the 50 fu column.

Continuing the equivalences place the point values at mangan.

This portion of the scoring table is the least used. Hands scored at 70+ fu rarely occur; but they most certainly do occur. To score 70+ fu, the hand needs the large amount of fu generated by closed kan involving terminal or honor tiles. Otherwise, the hand may also involve any multiple kan calls. Furthermore, the 70+ fu scores only apply to 1 or 2 han hands. With 3 han or more, the value is already set to mangan.

Point equivalences continue to apply for the 40 fu and 80 fu column, as well as the 50 fu and 100 fu column. The columns for 70 fu, 90 fu, and 110 fu all produce unique point values not found elsewhere on the scoring table. Therefore, those may have to be memorized on their own. Again, they do not occur frequently; so it is best and practical to learn these values after learning the rest of the scoring table.

Once again, these two values are directly linked to the chiitoitsu values. However, these han and fu combinations do not apply to chiitoitsu. As a reminder, the equivalences are (2 han 50 fu = 3 and 25 fu) and (3 han 50 fu = 4 and 25 fu).