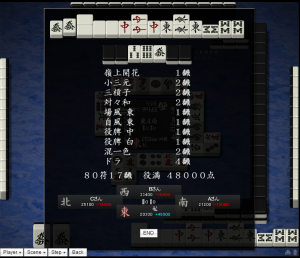 A yaku 「役」 is a certain pattern in a mahjong hand, or a special condition under which a win is declared. Many yaku are pattern-based yaku comparable to "poker hands". Unlike poker, yaku types do not supercede each other. Instead, they are the main factor to determine hand values. Players must finish hands before others do; and each yaku has specific values attached to them to determine payment amounts.

The yaku and their values are essential for scoring. The game rules define twenty-six different yaku, worth a different amount of han 「飜」 based on their difficulty or pre-assigned value. A player can incorporate several different yaku in the same hand and accumulate their han values for high-scoring hands. For additional scoring, the game also features dora. However, possession of dora are not considered as yaku, even though they provide han. In addition, eleven additional patterns are classed as yakuman. Finally, one special case may be allowed in nagashi mangan.

In order to win any hand in this game, a player requires at least one yaku. A hand having no yaku may not win, even if it has multiple dora. Declaring a win on a yakuless hand may result in chombo. So, as an early part of the game's learning process, it is essential to learn the different yaku listed here and eventually their han values.

The most important yaku to learn is riichi, since it is very common and a very easy yaku to achieve. A new player may find it easiest to avoid opening their hand and simply aim for riichi every time; no other yaku is required to win the hand. However, this strategy is far too simple for serious play and an experienced player should generally aim for a high-scoring yaku or combination of yaku from the beginning of the hand.

One han closed only

This yaku does not specifically deal with a player's hand, but rather the player's discards. In addition, the hand may or may not be at tenpai upon scoring. By default, this hand is set to mangan.

The above list is generally considered as the "standard yaku", including the yakuman. However, the game offers an even larger array of tile patterns. Various house rules may opt to use some of these yaku on their own.

Lists all the yaku occurrences in Tenhou.net by percentages and by room

Pointing out which yaku to learn first