The score table is generated using the Basic points and the Payment multipliers. Similar to a multiplication table, the awarded points are arranged in accordance to Han and Fu values. With known Han and Fu values, the appropriate point values can simply be read straight off the table. This brings convenience towards memorizing the score table, especially when the numbers arrange themselves into patterns. 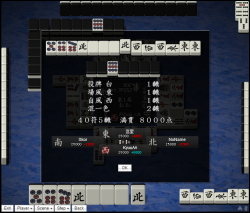 Hand scoring a mangan via tsumo.

For mangan 「満貫」 and beyond, a point cap is applied such that counting the exact amount of fu may not be necessary for scoring purposes. Mangan begins with hands valued at 3 han and 70 fu, 4 han and 40 fu, or 5 han. For each, if the fu count is greater, total points stay at mangan.

Furthermore, higher scoring hands are then awarded as multiples of mangan. So, in addition to mangan itself, these higher values possess specific names, namely: haneman, baiman, sanbaiman, and yakuman.

As an added scoring variation, kiriage mangan 「切り上げ満貫」 may be implemented. The difference in points for a 4 han 30 fu or 3 han 60 fu hand is negligible enough (300-400 points) to be classed as a regular mangan. So, under this rule, these values are recounted as mangan.

† - Values can be changed to mangan, via kiriage mangan rules.

† - Values can be changed to mangan, via kiriage mangan rules.

The following is a short list of terms, related to scoring. They are generally short cuts to saying different point values from the scoring table.