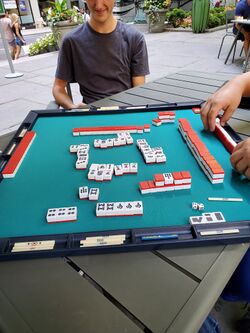 Chombo by Kyuu, ron called while having no yaku.

Chombo 「冲合/錯和」 is a penalty for heavy rule violations. Some moves may be considered minor and correctable, like accidentally drawing the wrong tile from the wall. Rule violations subject to chombo are harsh enough to abort the hand and impose a point loss on the offender.

In all instances of chombo, the current hand is then aborted and repeated. Players who have declared riichi during the aborted hand get their riichi bet back. Most rules leave the honba count unchanged for the repeat, while some rules may handle this like any other abortive draw.

A player penalized with chombo must pay a specified point penalty, depending on the setting. The most common is a mangan-sized penalty. To each other player, the offender must pay what the offender would have received on a mangan tsumo without honba. In other words, the offender pays a "reverse mangan tsumo". An offending dealer must pay 4,000 to everyone, and offending non-dealers must pay 2,000 to each non-dealer and 4,000 to the dealer. In some instances, the points specified may directly affect the uma, or the +/- end scores. As a time saver, chombo penalties may be applied post-game, especially when a time limit is imposed. Casual settings may simply ignore and bypass chombo altogether.

Another application of chombo penalizes the player post-game. After the end score calculation with oka and uma, a point penalty is applied. This format is relevant in tournament formats, where accumulated points play a role to overall standings. The deducted points is at the discretion of the tournament organizer.

A number of instances can place a player under chombo. All of these can be noted as "improper play" and a disregard of the game rules. Often, the penalties are accidental, but intentional penalized plays are also to be noted.

Cheating is very possible in the game. In fact, some players can execute various and elaborate cheating tricks. Some tricks involve "wall rigging" by deliberately placing tiles along certain positions on the wall. Other tricks involving tile switching from any part of the wall or even from the discard pile. Many of tricks involve the sleight of hand. The most skilled cheaters have the ability to perform these tricks with minimal detection, if any.

Tournament judges might decide on an even more severe punishment than chombo or disqualify the cheater.

Players cannot declare a win with an incomplete hand or on an incorrect waiting tile. The following conditions are deemed as invalid win:

Making an invalid call may be subjected to chombo. Showing the incorrect tiles for a certain call can be easily corrected if the player can still make a meld with that call, but if a call was made and the resulting meld is illegal, then chombo applies.

Technically, players may declare riichi at any time whether they be tenpai or not. However, a valid riichi may only be declared with a tenpai hand. Declaring riichi with a noten hand is not detected by the other players immediately. It goes unpunished if another player wins the hand or on an abortive draw. In fact, that is the best case scenario for a noten riichi call. The player would avoid the chombo situation. Otherwise, the noten riichi is punished with chombo, if the player declares a win, or when the hand must be revealed at ryuukyoku.

If the hand ends in ryuukyoku, riichi declarers must show their hands as proof of being in tenpai. Depending on the specific rules, a player may refuse to show the hand and instead take the penalty, even when tenpai.

During riichi, a player may call kan with an ankan, or closed kan. However, this is invalid when the player's wait changes. Typically, this occurs when, the four concealed tiles are connected to another tile grouping. Other players cannot detect this rules violation immediately, and it is punished at the same time as a noten riichi.

Calling with a dead hand

Lesser infractions are penalized by agari houki, or a "dead hand". In this case, players are not deducted points. Instead, a player with a dead hand is forbidden to make any type of call, such as chii, pon, kan, riichi, tsumo, or ron. Violation of the dead hand results in chombo however.

A player may not crash and destroy the wall, such that the tile arrangement cannot be recovered. This is by far one of the worst penalties, as the act ruins the game completely. It is worse, when done intentionally. The intentional act of destroying the wall may be considered to be extremely rude and renders an otherwise enjoyable game into a confrontational one. Here, a player may not just incur a penalty but also be ejected.

A number of other instances may be included as penalties. These adjustments may differ from setting to setting, as hosts have the discretion to declare certain actions worthy of chombo penalties or less.