Chinroutou 「清老頭」 is a yakuman, where every tile is a terminal, or 1's or 9's. No other tile type are used: no simples (2-8) or honors. For short, it can be referred to as chinro.

Routouhai 「老頭牌」 are the tiles numbered 1 or 9, among the numbered suits. In English, they are denoted as terminals, because they are at the end of the 1 to 9 number scale as the numbered suits do not loop. So a tile group such as 9-1-2 does not count, when it comes to forming tile groups. The terminals are as follows: 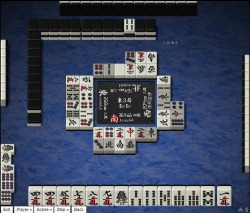 Possible chinroutou threat after two calls and a low terminal count among discards.

For this yakuman, there are only six types of terminals available: two from each of the numbered suit (1 and 9). Simply, no other tile type can be used for this yakuman. Given the basic hand pattern of four melds and a pair, five out of the six types of terminals are needed to build this hand. Since there are only six tile types available for this hand, it is impossible to form a chiitoitsu variation.

Aside from needing five out of the six terminal types, every tile group must be triplets. Any calls for kan are acceptable too. So, any attempt at this yakuman requires the proper number of terminals as well as the ability to collect triplets. More often than not, players must make tile calls in order to do so. Only a rare number of times can this yakuman be completed while closed. On the other hand, the yakuman is rendered impossible if enough terminals are discarded or made unavailable.