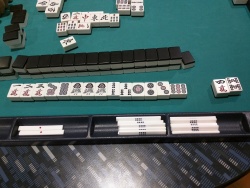 A single hand composed of six yaku to produce a baiman hand.

This is a table showing the compatibilities of the different yaku with each other. While yaku may be combined in one hand, some yaku simply cannot combine with each other due to tile counts and patterns. In other cases, one yaku would always imply another. For instance, a junchan hand has a terminal or honour in every group (since it has a terminal in every group), and so it would qualify for chanta. By rule, two yaku cannot be combined if one always implies the other. There is a partial exception to this as shousangen always implies at least two yakuhai for sets of dragons, but they are not necessarily the same two yakuhai so they are counted in addition.

Yaku strategy involves viability to form yaku and maximizing hand value, if possible. This maximization often involves the recognition of the different yaku forming in one hand. Often, this affects the decision which tiles to keep and which to discard.

Some combinations form a different yaku which implies one component of the combination, and as a result can never be counted:

These combinations are marked with

in the table below.

Whether or not these combinations are actually combinations depends on the technical definition of the yaku. Some yaku are restricted versions of other yaku, such as junchan and chanta. There are two alternative ways to define this in the rules: either chanta can require that the hand contain at least one honour tile, or it can allow no honour terminals, but with a separate rule saying that chanta and junchan cannot both be counted. In this case, since junchan is higher-scoring, any chanta hand without honours, while qualifying for chanta, would never score it. Most of these combinations, with the exception of toitoi + mentsumo, are based on the assumption that the yaku are defined using the second method.

Nagashi mangan is excluded, because it is incompatible with anything, even riichi.

Even different yakuman may be combined. As a result, point values may increase beyond single yakuman values as multiples of yakuman. Of course, that's only if the rules allow extension into double yakuman and beyond. Combinations involving three kinds of yakuman involve either tsuuiisou, tenhou, or chiihou. With this in mind, the options for combining different yakuman are limited.