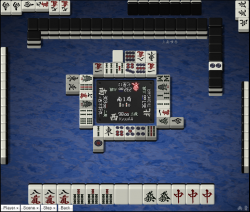 Damaten 「黙聴」 is a strategy used with closed tenpai hands. This strategy may also be referred to as a "hidden tenpai". Riichi is an optional play, rather than a mandatory one. Therefore, a player may sit and wait with a closed tenpai hand, hoping to win the hand without riichi. Typically during damaten, the player usually already has a valid yaku in their hand; otherwise, menzen tsumo (or other circumstancial yaku) would be the only option for winning. An older term yamiten used to refer to the same cases.

The major weakness of riichi stems from the inability to change the hand after making the call. In doing so, a player makes oneself vulnerable to the changing conditions of the game. Sometimes, other players may simply not defend against a riichi and conveniently attain tenpai while avoiding the riichi hand. In turn, the riichi call may result towards playing into another player's hand.

The current score may afford players to win hands without calling riichi. This is especially true for players with affordable leads near the end of the game.

Also, adding the yaku of riichi may not actually improve the value of a hand instantly. For example, a haneman hand is worth 6 or 7 han. Well, if a player's hand currently appears to be valued 6 han, it may not be necessary to take the risk of riichi just to upgrade the hand from 6 han to 7, when the point reward is no different.

Finally, a player may not actually want to announce their hand as a tenpai hand. Instead, a damaten hand awaits for other players to unexpectedly play into the hand. Therefore, the clear advantage to using damaten aims to catch other players off guard. At times, the hand may be devalued without the added value of riichi, especially when less than 4-han; but at times, the sacrifice may be worth it.

Multiple instances where damaten was employed.