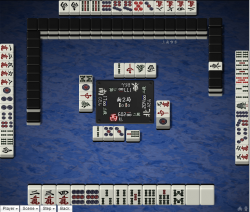 An ill-advised and unnecessary riichi.

Strategy surrounding the call for riichi entails various considerations. Players may very well blindly call riichi without any thought. Sometimes, this move pays off; and the player is rewarded. Then on the other hand, players are punished. Even worse, they are dubiously punished. While riichi hands gives players the chance for higher scoring hands, players must not be blinded by the opportunity without considering the risks. Sometimes, that riichi call may not be necessary anyways. Regardless, players win or lose on the risk-reward nature of the riichi declaration.

When it comes to riichi, one must weigh the advantages and disadvantages. 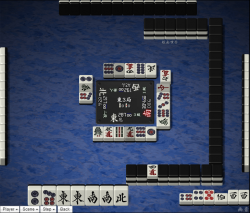 Riichi is not responsive to future changing conditions.

Once again, riichi is a discretionary play. In fact, in all instances of considering and calling riichi, risk is involved. Therefore, various factors must be considered before employing using riichi. At the same time, many plays involving riichi are highly recommended. Employing riichi is a matter of the current game state.

Some hands have yaku in themselves that they do not need to declare riichi to declare ron on other players. With these hands, the option of damaten (not declaring riichi) can be more alluring due to higher win rate (which will in rare occasions be more important than increasing the hand's score). Hands without other yaku can only be won by tsumo if riichi is not declared, and thus will almost never consider damaten an option - the only concern here would be defensive (ie. the player may wish to give up tenpai to defend later), which will only very rarely become an issue large enough to override the reward of winning the hand.

Declaring riichi means that, if the player decides to give up the chance to declare ron on another player's discarded tile, they will end up being in furiten for the rest of the hand, unable to declare rons on any other players discards. On the other hand, being in damaten allows the player to remain in furiten for only until their next draw in these situations. Occasionally this is an issue with hands that have waits with different values, as they are more or less forced to take the cheaper wait discarded by others instead of letting it pass - however, considering that Riichi already increases the hand's value by 1.5 hans or so in general, this is only really a concern if the difference between waits are at least 3 hans. Another issue is that one may want to specifically avoid getting ron from another player (mostly if it would reduce that player's point to 0 without achieving the goal of taking over someone with more points).

Generally, during the first half of the entire game, point standing is not as large of a concern due to that there are many opportunities to make up differences - this means that the players who are ahead can hardly afford to rest on their laurels, and also that players who are behind are not as desperate in catching up. Thus situations tend to be more general as point standing is not as important: riichi's increased reward is usually appreciated, its intimidation effect more often felt, and it is more often a good idea.

When the game is closer to its end (generally around the second half, but the point may become earlier if particularly large wins and losses have been going on), point standing becomes more and more of a concern as opportunities to overturn difference become scarcer. Players who are ahead may thus become more cautious, with riichi's risks amplified for them, amongst other considerations.

By declaring riichi, one is locking their hand for the rest of the round. In turn, the hand cannot change, even to get a better wait, gain value, nor defense considerations. This is really the most major risk of declaring riichi. Generally, the hand that is first to tenpai has significant advantage over other hands and thus the reward is well worth the risk, but especially if the hand's shape is not good, or if the risk of dealing in is greater than the reward of winning the hand with additional value, then it can be a bigger point of consideration.

After a riichi call, the likelihood of the hand winning places itself on its hand shape and tile waits. Hands with waits of three tiles or greater, such as ryanmenten or sanmentan, have a favorable chance of winning, while one tile waits like kanchan or tanki are less likely to win. Since pretty much all the risks associated with riichi is only if the hand fails to win, having a hand with good shape waits to win obviously means that they're less of a concern. Bad shape waits may be more pressured to keep the possibility of failure in mind, as well as the possibility of changing the hand into having a better wait. 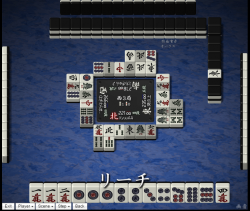 Riichi called to apply pressure onto the other players, with relatively low scoring differentials.

By declaring riichi, the player exerts pressure on the other players, as hands that are not yet in tenpai will be in a significant disadvantage when trying to contest another hand that is already in tenpai. As such, declaring riichi can easily intimidate other players into defending instead of attempting to win the hand, and even if they attempt to contest it, they may end up becoming more cautious and becoming less offensive in general. Of course, this is not guaranteed to work, especially if the point standings force some other players to take on offense at all costs. However, the advantage of having an early tenpai hand is high enough to offset this in general.

When the game is closer to its end, point standing can affect the decision to declare riichi or not in many ways. For starters, players who have a large lead will be more cautious, and the risk of less win rate or hand locking become amplified for them, while the reward of increasing value and intimidation are lessend. Players who are greatly behind, on the other hand, will likely cling to Riichi's increase in value, as all the risks in the world no longer matter to them. Players who are in the middle will also start having specific point goals for their hands to achieve their goals - one player may choose to damaten their hand because it is large enough to overcome the difference to another player's score, while another may choose to declare riichi because they need the extra points to do so. For these players there are no fast and hard rules to adhere to any more - they simply have to analyze their own situation and decide what goals to set for their hands, and whether if declaring riichi would fit (or not fit) into their plan.

Generally, declaring riichi will increase the score of a hand substantially. In addition to providing one guaranteed extra han towards the hand, it grants the opportunity to grab additional increases in ippatsu and uradora. For hands that are not close to mangan limit, declaring riichi will triple the hand's score on average. In general circumstances, this huge increase in reward alone is enough to offset any concerns riichi may raise, which is why it is such a popular move. However, hands which are already high in score will receive significantly less benefit from riichi —if any—, and the scoring situation may mean that the extra score is pointless.

The discarded tile for riichi calls are indicated sideways. In doing so, it marks when players have made their calls for riichi. With that said, the timing of a riichi can also be taken into consideration, especially when the defense of other players are taken into account.

With the discard pile divided into three rows, the timing of riichi can be noted as early, middle, and late. Early riichi, especially double riichi, have a huge information advantage. With very few tiles discarded, players intending to defend have little information to base discard choices on. Plus, the riichi may apply a wide range of tile waits to choose from and speculate.

Obviously, by pressuring other players into defending, one is essentially lowering their chance of winning. Assuming that the hand has other yaku and thus declare Ron without riichi, declaring riichi reduces the hand's chance of winning by about 40%. Generally this is offset by the increase of hand value, but not always. On the other hand, there are some hands which have such ridiculously low chance waits (single tile wait on dora, for example) even without riichi, that declaring riichi actually doesn't really reduce the winning rate at all, and pressuring other players into defending means that one is also reducing the chance of other players winning the hand afterwards.

Oikake riichi 「追いかけリーチ」 is a declared riichi, after another player had already declared riichi. In this state, two or even three players have simultaneously declared riichi; and thus, the game becomes a contest between two or three tenpai hands. In this state, any riichi declarer is liable of playing into another's riichi call. At the time same, this type of riichi is often utilized because at least one player is not able to defend. With multiple riichis occurring simultaneously, the players end up in a "riichi duel".

The process of four active riichi hands is not possible due to suucha riichi, or four called riichi. In this case, the hand ends if the fourth riichi discard is not a winning tile for any of the previous three.