Majsoul (aka Mahjong Soul, Jantama, Jakhon) is a Japanese mahjong game platform developed by CATFOOD STUDIO and distributed by Yostar. The game has some resemblance to Janryumon, in terms of graphics. The tile layout and graphical hands, as in "physical" hands, are displayed during game play.

The platform functions as a gacha game. Players may use in game currency to access various functions, such as items and ingame characters. On occasion, periodical events are available for special items, characters, and/or bonuses.

A tournament suite is available for users to become hosts and create their own tournaments. The interface allows hosts to set up tournament systems and custom rules not available in the main platform. 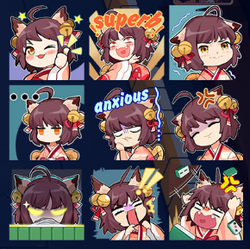 In Celestial, a special ranking system is applied. Players are ranked by a numerical level, as well as using a different way to calculate ranking points.

Each level starts with 10 Soul Points, and requires 20 to upgrade. Losing all the points will lead to a downgrade. The rank no longer persist forever as before; instead, players will be downgraded to Saint III if losing all the soul points in Celestial Lv. 1.

The gain or lost of Soul Points is only determined by rank, regardless of end score, listed in the following table. In addition, when all the players are Celestial in a single match, the soul-point changing is doubled.

An example of Copper-coin's calculation

The calculation of copper coins is a bit complex.

The Entry Fee is always applied as long as a match is taken successfully, although it's not shown in the final result.

For the Gain/Lost of match, the whole procedure is listed as follows:

Currently there are 60 characters in game, including 41 females and 19 males. Every new user is granted access to Ichihime and Miki Nikaidou. Additional characters must be summoned via the gacha system, with Jade as currency or with the Summon Scroll item. Jade can only be acquired via monetary purchase, while Summon Scrolls may be obtained via events, system mail as gifts, or purchase in the item shop.

A number of the characters remain in the mainline group for Mahjong Soul. These are readily available throughout the year via gacha. In addition, limited edition characters are/were temporarily available via collaborations with some anime series.

Each character has a unique Bond Value. The value can be enhanced by gaming or gifting to unlock corresponding vocals and story plots. At the maximum affection level, all voice lines will be unlocked, and the character will read out yakus after winning a hand. Characters can be entangled to unlock new appearance as a skin that can be chosen, accompanying with 3 extra emotes.

Bond values can be acquired as follows:

If playing with a max-bond character, the bond values will be tracked such that every 1000 points grants a "bond gift". Similarly to other blue gifts, this can be given to another character to increase 1000 points of bond value, and also can be donated for 5 dusts.

Gifts can be given to a character to increase your bond with that character (see Bond System section), or turned into star dusts if they can be donated. 50 star dusts can be used at the lucky cat to attempt getting larger rewards, including a new character.

Apart from standard and bonded skins of each character, more alternative skins can be acquired during events. In the vast majority of cases, these skins both require monetary purchase, by using Outfit Vouchers. Usually each static skin requires 880 vouchers, while animated requires 1,500, and both accompanying with one extra emote.

Exclusive characters are characters can be acquired only in a limited time, usually during an event. Regular character pools do not contain them after the acquisition period. Usually those characters are from animation / manga series, or collaborators. A few of them are official characters but with rarity settings.

Self-exclusive characters are official characters with a lower rate to summon, as well as requiring more faiths to exchange, and meanwhile, can also only be acquired in a limited time. In exchange, the bonding stage rewards extra equipment or decorations, and their bonding skin is animated.

3P-Mahjong (Sanma) is a variation based on regular mahjong, allowing 3 players to start a match.

The ruleset of Majsoul Sanma basically refers to Tenhou. Most of the rules are identical to Tenhou Sanma.

There're two different scoring mechanics ingame, by default Tsumo-Loss is applied in Ranked Matches, while North-Bisection is provided as an alternative option in Friendly Matches.

In Ranked Match Tsumo-Loss is applied.

The scoring table with Tsumo-Loss is basically identical to regular 4P-mahjong:

When North-Bisection is applied, the scoring table on Tsumo is as follows:

The calculation on Tsumo is finished by the following steps:

A number of special rooms are offered in the game. They provide players a game experience using alternative rules, not normally found in other interfaces. Due to the number of game modes, they are offered temporarily, but they do recur for everyone's enjoyment.

The tournament lobby has been made available, and Yostar launched the first Catfood Bowl Tournament.

The following titles are acquired by satisfying enough amount on charge. The title gets upgraded when acquiring the next level, accompanying with corresponding rewards and bonus effects.

Jantama PONG☆ is animated series has been released for the 2022 spring anime season. The first episode aired on April 1, 2022. The series presents mahjong soul via animated shorts (~5 min episodes), released on the Mahjong Soul Youtube channel[9]. Characters featured in the episodes are subjected to various gags.