Chankan 「搶槓」 is a standard yaku. It is dependent on the usage of kan, where a player may declare ron while a player calls to upgrade a minkou (triple called via pon) to a shominkan (added kan). In other words, if a player is tenpai for a tile used for that specific added kan, then the player may declare a win on that tile.

In almost all cases, players are not allowed to call ron on an ankan (closed kan). The notable exception involves a kokushi tenpai hand, where the last tile needed for the yakuman is called for an ankan. However, the kokushi exception varies on the rules. In some rules, it is disallowed outright. 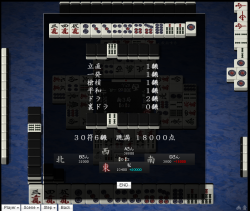 Chankan example, where the player declared ron on 1-pin and all four are shown as a kan.

Alternatively, this yaku may be referred to as "robbing a kan". Tenpai for chankan must involve a hand, in which one of the waiting tiles has been called as pon by another player. Any tenpai hand works for chankan, even "yakuless" hands. As long as the waiting tile has been called for pon earlier and then the player calls for an added kan, this creates a time for a player to claim the added tile for a win. Naturally, waits involving honor tiles do not work in this situation.

If a player is tenpai for suukantsu and a fifth kan is invoked, chankan may not be applied if that fifth kan is an added kan.

As defined, chankan can only be achieved when a minkou (open triplet) is upgraded to a shouminkan. In other words, a player had called pon earlier and then drew the 4th tile, for the kan. If another player is tenpai for that tile, then the player may declare ron. To some degree, the added kan may be viewed as a discard in this case.

So, when it comes to machi (wait patterns), only three basic types can be used for chankan: penchan, kanchan, and ryanmen. Some patterns that utilize any of these three may also apply. This is simply due to the number of tiles remaining (just one), for every minkou. So, tile patterns involving shanpon and tanki are impossible for chankan, as they each possess tiles necessary for kan calls.

In the case for kokushi musou, the hand is tenpai for kokushi with one of the 13-tile types already paired; and it is waiting for the last tile type for completion. An exception to kan calls involving ankan (closed kan) is made.

Under any possible instance of chankan, one player is barred from calling ron and awarded this yaku due to furiten. The initial tile discard was granted for the open call for pon.

Essentially, chankan combines yaku, that utilizes the tile waits of either ryanmen or kanchan. Either of these two tile waits do not include the waiting tile in the hand. That excludes toitoi, chiitoitsu, and honroutou. These three require the tile waits of either shanpon or tanki; and so, the fourth tile to invoke kan is used in another player's hand. As for ryanpeikou, this hand may use ryanmen for completion. However, the tile requirement for ryanpeikou is already in the hand. Otherwise, chankan invoked with a ryanpeikou tenpai hand would only count for iipeikou.

As for rinshan, haitei, houtei, and mentsumo, it is physicially impossible to combine any of these four with chankan. In the case for rinshan, the possibility to combine with chankan is outright impossible, as rinshan is defined by winning from the dead wall tile draw. In the case of haitei and houtei, a player cannot call kan, when the dead wall cannot be maintained at 14-tiles. This case occurs, at the last allowable tile draw of the hand.

The ippatsu yaku is normally interrupted by a kan call. To call chankan, the opposing player had already called for kan. However, ippatsu is still not interrupted because the whole kan process has not been completed. The entire kan process includes the kan call itself, plus the rinshan draw and the discard afterwards. The chankan win occurs in the middle of that process. So, it is allowable to score both ippatsu and chankan at the same time. 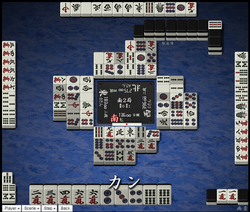 Case where a closed kan was declared during a kokushi tenpai.

Given the procedure for kan, the chankan takes precedence over rinshan kaihou. Here, the call for a chankan win denies even the drawing of the rinshan tile. Therefore, even the chance for rinshan kaihou is denied.

If the rules allow, a special case for kokushi musou exists. This involves a kokushi tenpai hand, where the final tile may be completed with an opponent calling kan with a closed kan using all four of that particular winning tile. Thus, ron may be declared in that instance, involving the special chankan rule. This is the only case where a tile may be taken from an closed kan. However, this particular rule may be subject to variation, which may or may not allow the play to occur.