Tenhou.net uses a ranking system, where players are ranking according to two criteria. The first criteria uses a combination of the kyuu ranking 「級」 and the dan ranking 「段」 systems. The other criteria is the ELO system, indicated as R####.

Tenhou.net uses two different number systems to determine player ranking: kyuu/dan ranks and the ELO system. For every game, points may be awarded or deducted based on game placement (1st throught 4th). The points awarded or deducted are noted in tables below. Placing 1st or 2nd awards points, while 4th has points deducted. Prior to the rank of 2級 (2-kyuu), players need not worry about point deductions. Afterwards, that would no longer be the case.

Every time a player moves up in rank, the points in Tenhou default to the value indicated at base points 「初期pt」 column. If those base points fall below zero, then the player drops a rank. If the player attains enough points to surpass the target points 「昇段pt」, then a rank promotion occurs.

In general, account sharing is prohibited. Every Tenhou account code is reserved on an individual player basis. Any account found to have been shared will be warranted a ban from the ladder system. However, accounts may be shared for use in private lobbies.

At the very beginning, every player begins with a base rating of 1500. That number increases or decreases based on wins or losses, as well as the relative rating of the other players. The change in rating after each game is applied as follows:[1]

To access the higher two lobbies, both tokujou 「特上」 and houou 「鳳凰 」 also require minimum ratings. For tokujou, a 4-dan 「四段」 may access the lobby with a minimum of 1800. Houou players are required to retain a rating of 2000 or greater at a rank of 7-dan or better 「七段」.

Players with registered IDs have various statistics tracked by Tenhou.net. These numbers can be read on the right side of the lobby window. 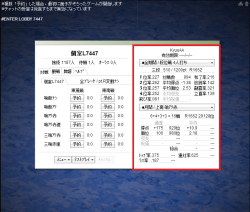 The starting amount of points for the current rank.

Number of points needed to achieve the next rank.

Tenhou points awarded for first place from one game.

Tenhou points awarded for second place from one game.

Tenhou points awarded for third place from one game.

Tenhou points awarded for fourth place from one game.

Upon achieving the next rank, excess Tenhou points is dropped and reset to the next base points.