Saki 「咲-Saki」 is a franchise featured in three separate animated series based on an ongoing manga series. The franchise centers itself around the title character, Saki, who herself is a member of the Kiyosumi High School Mahjong Club. The franchise is produced in a currently ongoing manga series, three animated seasons, and two video games. The fictional universe of the Saki series features a number of characters, most of which are associated with their high schools. Together, they compete in the 71st Inter High School Mahjong Championships [1].

Various characters feature special abilities surrounding different aspects of the game. For example, the title character Saki wields the ability to win via rinshan kaihou at abnormally high rates. These different powers with the different character personalities are then matched together in the mahjong games throughout the tournament. In a sense, the characters can be viewed as personified aspects of the Japanese game pitted against each other. 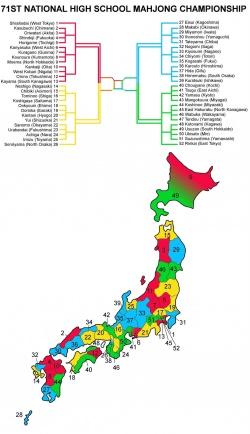 The story and setting of Saki can be described as the "Sakiverse", or Saki universe. Here, the story is set around the year 2050. In this fictional universe, the game of mahjong is treated as a sport, where even competition at the high school level receives a large amount of media coverage. The main story centers around the title character Saki and her participation in the Kiyosumi High School Mahjong Club from the Nagano region. As the team advances through the brackets one stage at a time, then so does the story.

The Interhigh Tournament involves countless numbers of high school teams across Japan. Each team fields 5 players, to be matched with corresponding players from other teams. A total of 52 high schools entered into the National Tournament, where they each had to compete for their respective spots via their regional tournaments. Each regional tournament took place within each of Japan's prefectures. Though, five had to be split due to either size or population density. Given the size and scope of this fictional universe, only a number of teams are featured in the story itself. From each region, only one school qualifies into the national tournament. Even then, sections of the national bracket do not encounter neither the teams of Kiyosumi or Achiga. That leaves a majority of the schools in the "unknown" category.

The tournament structure groups schools into four per section of the tournament bracket. Depending on the round, either the top two teams or the winner moves on in the bracket.

Participants play their games in a large and staged room. Once their games begin, the lights are dimmed with a bright light shining over the automatic table. Non-participants, media, and play-by-play commentators access the play view through large televised screens. The audience especially get to view the competition in large rooms, similar to that of movie theaters. This is the general setup in both the regional and national tournament.

A number of generally accepted rules to Japanese mahjong is incorporated in this series. Two notable variations involve rinshan kaihou and yakuman. With rinshan kaihou, sekinin barai is applied. Regarding yakuman, the single yakuman cap rule is in effect. Otherwise, the game in this story follows ari-ari rules.