Sega MJ is a mahjong platform by the game developer, Sega.

The client can be downloaded from the official site. It is available for Android, iOS, and Windows. Upon launching the client for the first time, after clicking through the splash screen and warning message, the following screen (or something similar) should be visible: 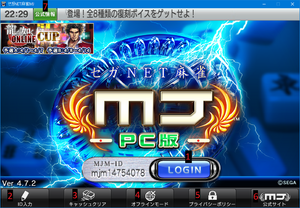 The Login Screen for Sega MJ

Creating an account is fairly straightforward. After logging in, the avatar can be customized and account settings initialized. 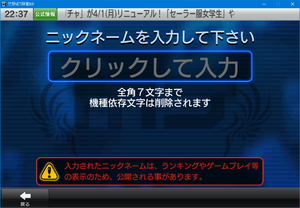 Enter the public-facing nickname for the account here. If the name is valid, pressing Enter or clicking/touching outside of the entry box should show an "OK" button. 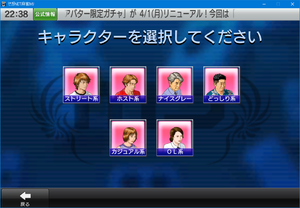 Avatar selection. This selects the default character for the account. 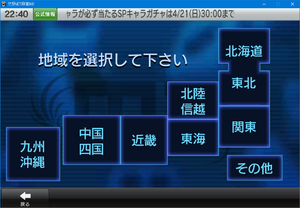 Select which region of Japan the account should be associated with. 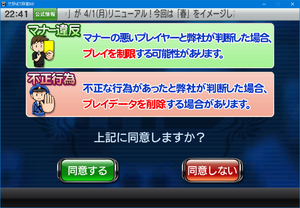 The final terms agreement, which states to play in a good manner and not to hack player data. The green button is to accept, and the red to cancel.

After accepting these terms, the main lobby should be launched. Some items may have to be downloaded. In general, the green button is to accept and the red button to cancel. 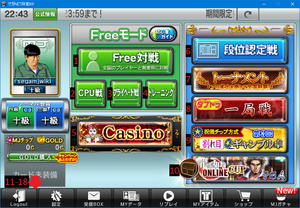 The main lobby for Sega MJ.

Remember these terms as they will appear a lot:

There are three types of currencies in Sega MJ:

NOTE: When purchasing an item or entry that can be purchased with MJ Chip or Gold, SEGA MJ will always spend gold first! This is the currency you will receive if you pay cash. Gold can be used on almost everything in the entire game, except the Chip Gacha. This includes all mahjong rooms, the casino, and all the gachas except the Chip Gacha. Things that are gold only include most gachas (including Character, special Event, and Voice Gachas), buying tickets in bulk at a reduced rate, buying into tournaments late, and nickname changes.

NOTE: When purchasing an item or entry that can be purchased with MJ Chip or Gold, SEGA MJ will always spend gold first! This is the "free" currency. Prizes awarded from inside the game will usually be given in MJ Chip. These prizes can be won from scoring +50 over 8 games in the free rooms twice per month, from placing A rank or higher in events, placing top position in the league or tournaments, or finishing a challenge card. It can be used for playing in ranked, event, or gamble rooms, used on the Chip Gacha (not all gachas), and used in the casino. The main restrictions with MJ Chip as opposed to Gold are the majority of gachas and cosmetic items.

These are very straightforward and the newest currency of all. They are only found inside chests from finishing challenge cards or placing A rank or higher in events. They can only be spent on casino games. 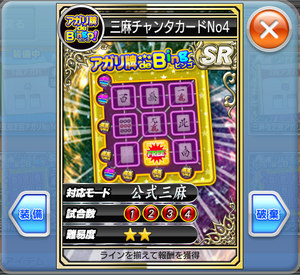 An example of a (Bingo) Card awarded in Sega MJ.

Occasionally, upon opening a treasure chest or ranking up, a card may be received. Cards can be equipped under the My Item tab, and then by selecting Card Binder, clicking the card, and clicking the left arrow. Cards can only be progressed in League, Tournament, and Event rooms. Cards will have tonpussen or sanma written on them, denoting the mode they can be progressed in. Free rooms and Gamble rooms will not work. There are two kinds of cards:

These cards will have 9 spots, more similar to Tic-Tac-Toe than Bingo. Completing a line will get the reward (usually a treasure chest) at the end of the line. Spaces can be filled in by winning hands with the specified mahjong tile on the Bingo Card space in hand. It does not have to be the last tile drawn/ron, any tile in the hand will fill the space.

These cards will have a specific goal for you to accomplish, for example getting 1st place in a match. Upon completing the goal, the card will award you the chests noted on it.

As an account progresses up the rating system, each new level (from 10th kyu to 10th dan) will award a bonus the first time the account achieves it. After 10th dan, these rank up bonuses are no longer awarded.

Treasure chests can sometimes drop medals, and they can also be obtained by selling avatar items that are no longer wanted or that are duplicates. These medals can be used in a medal shop in-game. There are items to be purchased there including clothes and accessories for default characters, backgrounds, borders, and a small list of music (BGM). 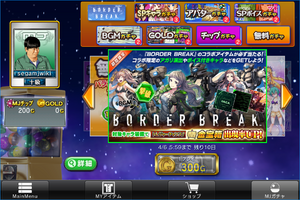 The gacha screen in Sega MJ.

In SEGA MJ, each gacha specifically denotes what can be obtained from rolling it, and a catalog of all items of that gacha can be seen by clicking the green magnifying glass button. This catalog does not exist for the daily free gacha, chip gacha, and SP chip gacha.

As an example, in this screenshot: